When you get down to it, Legacy Box does have legitimate "sale" prices. It is their "regular prices" that are fake.
Let's compare LEGACYBOX's "Let's Pretend SALE" PRICES
TO AFFORDABLE SCANNING's Regular Low PRICES.
See below.

The famous P.T. Barnum reportedly said: "You can fool most of the people most of the time."

Judging by the amounts of customers, in the millions, Legacy Box says they have dealt with, if these former customers of Legacy Box had a chance to see how they could have had their slides digitized and looking so much better and for a lower cost, they would have to admit that they had been made to feel like fools and they had indeed been fooled. They thought that if a company paid for such extensive advertising on so many different mediums and had famous magazines and famous celebrities singing their praises, that they must give the very best service and there couldn't possibly be any place that would do a better job than Legacy Box and even have lower prices than Legacy Box.

Here is a link to a good NBC News article that has looked into some stores that seem to have a never ending sale. Click Here.

From the NBC News article: "But is that “sale” price really a special, reduced price? Not always, according to a new study by the non-profit Center for the Study of Services, also known as Consumers’ Checkbook. They concluded that some well-known stores seemed to have perpetual sales on certain items, so the “discounted” price is really the regular price."

Again from the article: "It’s shameful what they’re doing,” Brasler told NBC News. “They’re making it appear that this is a special low price, when in fact, it’s always their price. And often, it’s not even a low price, if you took the time to compare."

From the article: "The Federal Trade Commission does have rules about false, misleading and deceptive advertising. In its guidelines against deceptive pricing, the commission tells retailers that a product can be advertised as being sold at a reduced price if the former price was “a bona fide price at which the article was offered to the public on a regular basis for a reasonably substantial period of time."

I wonder if Legacy Box has ever sold any of their services at the non-sale price?

From the article: "The bottom line: You can never assume that a sale price is a good price. The only way to know what sort of deal you’re getting is to compare prices at a variety of stores over time."

The little trick that Legacy Box uses in it's marketing is to try to panic you into making the purchase by "buying" a package deal. Once you make that purchase, you are locked into that purchase. No more shopping for the better deal or the deal where you can pay less than Legacy Box and then even end up with professionally restored images of faded slides.

I think it was also P.T. Barnum that reportedly said "there is a sucker born every minute. 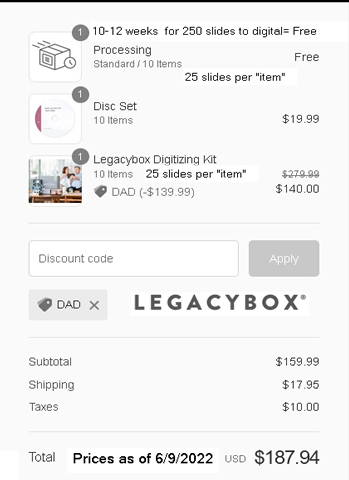 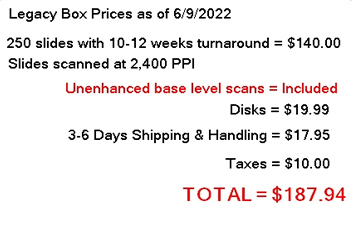 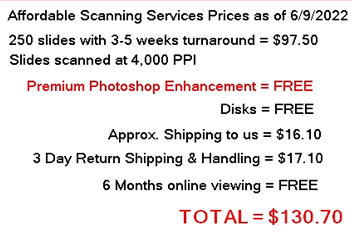