NOTE: This scanning is for a base, unedited scan of your film. These films are dust magnets. We do not attempt to fix any dust on your images, after scanning. This is our minimal service.

NEGATIVE SCANNING IS FOR BLACK AND WHITE NEGATIVES ONLY! 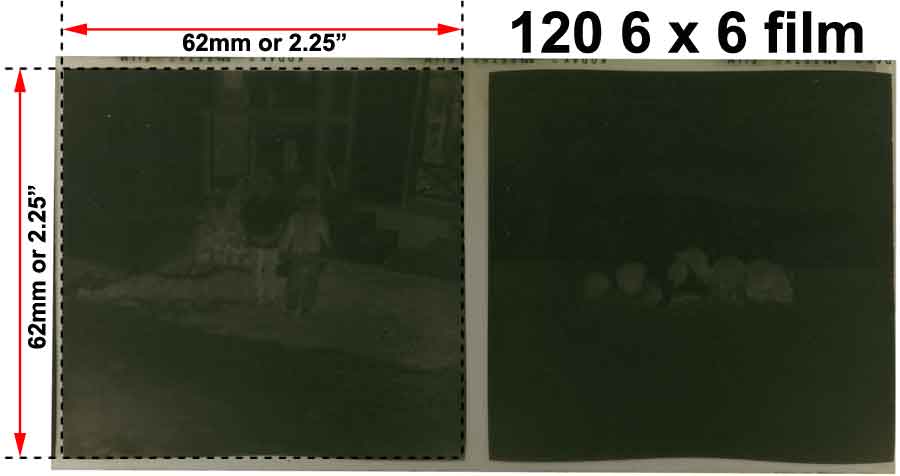 The Medium format film was created specifically for the Kodak Brownie cameras back in 1900-1901. It was a very simple camera that was basically, fixed focus and "point and shoot." It had a single shutter speed. The "Brownie" camera took its name from cartoon characters that were popular at the time depicting mischievous but good hearted elves.

Medium format means 120 and 220 size roll film. The film is on a spool rather than in a cassette.

Just about every emulsion from the major film companies was available in 120 film. Most were available in 220 as well. The difference between 120 and 220 film was that 220 was twice as long and therefore holds twice as many images as 120. The spool sizes were the same. What differs is that 120 film has a paper backing that runs the full length of the film. 220 film only has a paper leader. Thus more film can be wound in the same space with 220.

Essentially, 35mm film is a fixed size format: 24X36mm while 120 and 220 roll film can be used for several different frame widths and thus formats. The film is fixed at 6cm width so what varies is the length. The most common formats are, in Centimeters, — 645, 6X6, 6X7. The camera determines what "format" is shot onto the 120 or 220 roll of film. Some cameras had/have interchangeable backs which can change the size of the picture.

Although bigger in size, a 6X6 camera is usually convenient because it makes it unnecessary to rotate the camera between horizontal and vertical pictures. A 6x6 would get 12 shots to one roll of 120 film.

6cm × 7cm enlarges exactly to 8" × 10" paper, which accounts for its users calling it the ideal format.

If bigger is better, why doesn't everyone use 6x7 cameras? The question here is quality vs. portability. 6x7 format cameras are heavy. They are basically made for studio use, whereas a 645 camera will give you the same portability as a high-end 35mm SLR camera. It's almost impossible to take 6x7 pictures without a tripod.

Kodak introduced the Six-20 camera in 1931 and along with it the 620 film. About this same time Kodak stopped manufacturing the cameras that take the 120 film. In the United Kingdom, Kodak Ltd. manufactured a few models in the 1950's and '60's. The Six-20 was classified as a "pinhole" camera, the view finder is on top.

620 film continued to be popular until the 1960's, when the introduction of the cartridge-loading Instamatics simplified the loading of film into cameras. The Brownie Reflex 20 was probably the last 620-film camera to be made by Kodak.

Kodak stopped manufacturing the 620 film in the 1990s but 120 film can be used in a 620 camera because it is the same size film. The difference is that the 120 spool is larger in diameter than the 620 spool. The film is identical, so all that needs to be done is the 120 film can be wound onto a 620 spool. This is a two step process since the film has a start and an ending. First you would have to wind the film off onto a spare 620 spool and then wind it back onto another 620 spool. Naturally, you would have to do this in a dark room.

If your medium format film has been rolled up and has a tight curl to it, it is going to be hard for us to get a good scan for you. Please don't send us film in this condition unless you are willing to accept whatever we can get for you.